Skip to content
Topics / Road to recovery: Cancer in the COVID-19 era

Delays in screening and diagnosis 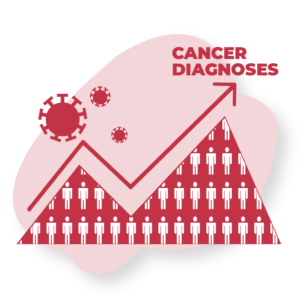 Many screening services operated at reduced capacity during the initial waves of the pandemic — in some jurisdictions, up to 40% fewer tests were conducted in 2020 than in 2019 — meaning people were not being screened for certain types of cancer as often or on the same schedule as before COVID-19.1,2 While screening services returned to pre-pandemic levels in 2021, the impacts of those initial delays will be long-lasting.

Some populations have been more affected by delays in screening and diagnosis than others. For example, Ontarians who live in lower income neighbourhoods are more likely to experience diagnostic delays following an abnormal breast or colorectal cancer screening test.1 In addition, First Nations peoples living on reserve in Ontario are may be more likely to experience diagnostic delay following an abnormal screening test.1 That means their cancer may be be diagnosed at a later stage when chances of cure and survival are lower.

Primary care providers can play a critical role in the early identification of potential new cases of cancer, but pandemic-related restrictions and service reductions made it harder for many people to see primary care, diagnostic or specialist consult providers in person. Physician activity was well below pre-pandemic levels throughout 2020, which may have resulted in fewer cancers being diagnosed early.3

Canada lagging internationally in some areas

Studies by the International Cancer Benchmarking Partnership (ICBP) have shown that although overall Canada has a high cancer survival rate compared to similar high-income countries, it lags behind for certain cancers, such as esophageal and ovarian cancer.4 In addition, improvements in survival in recent years have not been as pronounced as those of peer countries, which means Canada’s relative standing may be slipping.

The gaps in survival are driven largely by limitations in cancer care capacity. Recent ICBP studies found that Canada ranks below peer countries in access to key diagnostic tools such as PET-CT scanners.5 In 2017, Canada had 0.13 PET-CT scanners per 100,000 people, lower than Australia, Denmark, Ireland and Norway. (The number of scanners reported ranged from 0.04 per 100,000 in Wales to 0.66 per 100,000 in Denmark.)

Other challenges contributing to survival gaps involve pathways to diagnosis. A recent study found that 28% of people in Canada are diagnosed with cancer via emergency hospital admission, which is associated with worse outcomes and a lower likelihood of survival. While Canada had the third-lowest percentage of the nine countries participating in the study — which ranged from 24% to 43% of individuals diagnosed via emergency presentation — there is clear room for improvement in this area.8

Research is underway to contextualize differences in cancer survival in high-income countries and to explore ways to close these gaps in the Canadian context.