Prevention plays an important role in reducing the risk of lung cancer. The ability to reduce risk factors is directly related to various social, economic and environmental factors that are often beyond an individual’s control.

The likelihood that someone will smoke is closely related to a complex interaction of social determinants of health and other factors, including tobacco industry influence, which results in higher smoking rates among lower income and rural populations.

How we characterize tobacco use

Percentage of people who report smoking daily or occasionally 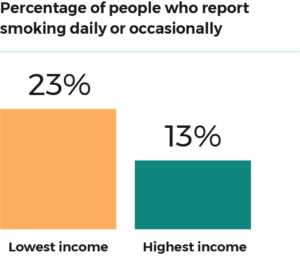 Environmental and workplace exposure to carcinogens

Previous: First Nations, Inuit and Métis
Next: Diagnosis and treatment