Read an interview with Dr. Andrew Pipe at the University of Ottawa about the importance of bringing programs to help people quit smoking into the clinical setting 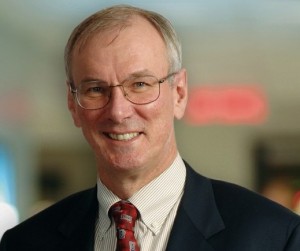 Over the last 40 years, thanks to cancer control policies in Canada, the percentage of Canadians who smoke has gone from roughly 50 per cent to roughly 16 per cent. Can we do better?

Yes we can. That is still too many Canadians who are smokers. It translates into roughly 5,200 hospital admissions a day that can be directly attributed to smoking. We need to push those numbers lower.

Tell me about the smoking cessation work you do at the University of Ottawa?

We’ve developed the Ottawa Model for Smoking Cessation, which is universally applied to all patients who are admitted to the Ottawa Heart Institute and has been implemented in more than 150 health-care facilities across Canada. A modification of this model has been developed for family health teams and primary care practices in Canada. The model mandates that the smoking status of any patient in any health-care setting must be identified and documented. That patient is then offered help with smoking cessation from a clinician who is trained in pharmacotherapy, and the patient is followed-up with in the weeks after the cessation attempt.

We also conduct ongoing research programs to improve our ability to help our patients stop smoking. Finally, we do a significant amount of professional and public education around smoking cessation, with an emphasis on professional education to improve the skills of clinicians.

Can you talk about the most promising clinical approaches to smoking cessation you’re looking at?

We know that most of the people who remain smokers these days are really addicted to nicotine, so our focus is on the symptoms of withdrawal. Just as we treat the physiology of hypertension with medication, we can treat the physiology of nicotine withdrawal with medications that can alleviate those symptoms, such as nicotine replacement therapy. But probably the most important approach we take is helping clinicians identify smokers, offer assistance with smoking cessation and then follow up. We’re trying to change the language and the attitudes of clinicians.

What are the top things physicians should know about smoking cessation that they might not already know?

Smoking is not a habit.

How can clinicians integrate smoking cessation into their primary care practices?

We can dramatically improve the efficiency and effectiveness of smoking cessation interventions in the primary care setting by integrating the smoking cessation protocol into the pattern of practice. That can be done particularly seamlessly in settings with electronic medical records. It also involves ensuring that all staff in a particular clinical practice setting assist with smoking cessation in ways that are appropriate and consistent with their other areas of responsibility.

What is the role of policy in smoking cessation?

Policy is very important. We know that the development of smoke-free environments, for instance, can have a dramatic impact on increasing the interest of smokers in quitting, and it can provide very explicit support for those who are in the process of quitting or who have recently quit smoking. We also know that increasing the price of tobacco products impels smokers to make quit attempts. We know that attempts to minimize the attractiveness of the product by, say, adopting a plain packaging technique also can be important in tempering the urge to smoke.

How do you implement a tobacco control strategy while taking into account the wide range of clinical health-care settings in Canada?

One of the important elements is to move toward a uniform smoking cessation approach, such that people can access the skills of smoking cessation clinicians and experts in a variety of ways—through hospitals, family physicians, public health units or quit lines. That way, there’s a seamless cessation system that’s established across our communities.

Can you talk about the link between smoking cessation and lung cancer screening?

Understandably, many individuals with a long history of smoking are very concerned about lung cancer, so they are likely to take advantage of lung cancer screening programs. That’s a perfect opportunity to provide—in a very sensitive and strategic way—assistance with smoking cessation. Even in individuals with lung cancer, we know the response to treatment is dramatically improved if they quit smoking.

How does mental health play into smoking cessation?

It’s very important to understand that individuals in Canada with significant psychiatric issues have a life expectancy that is almost 25 years less than that of other Canadians. A large proportion of that discrepancy is accounted for by tobacco-related diseases. Individuals with psychiatric illness have very high rates of smoking for a number of reasons. They derive partial relief of their symptoms from smoking. For example, those with depression will feel better because hundreds of times a day, each time they smoke, they’re self-administering smoke agents which have antidepressant properties. The myth exists that it’s almost impossible to help these patients quit smoking. That’s not true. We should be moving quickly to ensure that all psychiatric facilities in Canada are smoke free because that will act as a stimulus to smoking cessation in this very vulnerable population.

Review results about Canadian clinical smoking cessation approaches, now with data from 2018 to 2020

Review results about Canadian smoking cessation programs for people living with mental illness(es) and/or addiction, now with data from 2018 to 2019