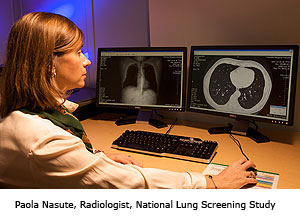 About 600 eligible participants have been recruited in the first weeks of the Pan-Canadian Early Lung Cancer Detection Study being funded by the Partnership and the Terry Fox Research Institute.

“Participant recruitment is off to a strong start,” says Dr. Heather Bryant, Vice-President, Cancer Control, at the Canadian Partnership Against Cancer.

The study has processed more than 1,400 calls from potential participants. Nearly 600 were eligible to enroll in the study, which is to include 2,500 participants.

The study will screen current and former smokers between the ages of 50 and 75. It will determine lung cancer risk through:

These will help identify higher-risk individuals who would be recommended for in-depth examinations using an X-ray technique called spiral CT or bronchoscopy, where a thin tube is used to examine the airways.

“We anticipate that this study will provide evidence to help Canada decide on how to proceed with an early detection and treatment program for lung cancer, if randomized controlled trails of CT scanning technology elsewhere show it to be an effective test,” says Dr. Victor Ling, Scientific Director of the Terry Fox Research Institute.

Recruitment for the study continues. Interested current and former smokers between the ages of 50 and 75 can call the toll-free registration line at 1-888-505-TFRI (8374).

Launched in September 2008 with funding from the Terry Fox Research Institute and the Canadian Partnership Against Cancer, this study builds on current international initiatives.

By evaluating the effectiveness of readily accessible and low-cost detection techniques, the study will inform any eventual nationwide approach to the early detection of lung cancer. 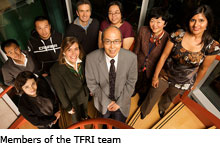 Findings from the study will be used in recommendations to provincial and federal health ministries. If lung cancer screening is shown to benefit survival rates, Canada will be poised to implement a program.

Additionally, this study will develop a Canada-wide community of lung cancer specialists who will be able to support the world’s first cost-effective lung cancer detection program, if doing so is deemed necessary.

Lung cancer is the leading cause of cancer death in Canada and in the world. Each year, it claims 1.2 million lives worldwide. This is more than colorectal, breast, and prostate cancers combined.