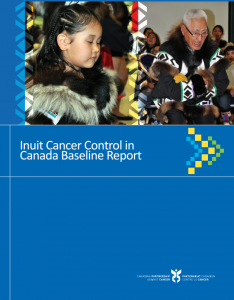 TORONTO — Although relatively unknown to past generations, cancer has become the second-highest cause of death in the Inuit population and is having a profound effect on patients, their families and communities. The incidence of cancer is rising and social determinants of health and behavioural factors interact in complex and individual ways to raise the risk of Inuit developing cancer. A new report released today examines cancer control for Inuit across Canada and provides a baseline against which progress can be measured over the coming years.

“I am encouraged to see the Canadian Partnership Against Cancer’s Inuit Cancer Baseline Report launched,” said Inuit Tapiriit Kanatami President Terry Audla. “The report is comprehensive and demonstrates the Inuit realities with respect to health status, barriers and efforts. We will continue to work collaboratively with the Inuit Nunangat regions to address controlling the levels of cancer in our population.”

The Inuit Cancer Control in Canada Baseline Report provides context for the cancer pathway for Inuit and includes information on promising practices across the cancer control continuum. It looks at the patient experience from screening and diagnosis through to survivorship or palliative care, as well as challenges experienced by Inuit patients throughout their cancer journey.

“Access to services for cancer prevention, screening and care is challenging for Inuit living in isolated communities. The necessity of medical travel, health human resources shortages and lack of culturally relevant resources and services present significant barriers to effective cancer control,” says Lee Fairclough, Vice-President, Strategy, Knowledge Management and Delivery at the Partnership. “Promising practices exist across Canada and internationally that can be leveraged and adapted to meet the needs of Inuit and improve patient experiences and health outcomes.”

The Canadian Partnership Against Cancer works closely with First Nations, Inuit and Métis peoples and organizations to advance culturally relevant and people-specific cancer control initiatives that best reflect their needs and priorities.

The Inuit Cancer Control in Canada Baseline Report is part of a series of reports released by the Partnership to further examine emerging priorities for action among First Nations, Inuit and Métis communities. The First Nations Cancer Control in Canada Baseline Report was released in December 2013 and a Métis baseline report will be released in 2014. The majority of information within the baseline reports is sourced from environmental scans completed in 2012.

The Canadian Partnership Against Cancer works with Canadas cancer community to reduce the burden of cancer on Canadians. Grounded in and informed by the experiences of those affected by cancer, the organization works with partners to support multi-jurisdictional uptake of evidence that will help to optimize cancer control planning and drive improvements in quality of practice across the country. Through sustained effort and a focus on the cancer continuum, the organization supports the work of the collective cancer community in achieving long-term population outcomes:  reduced incidence of cancer, less likelihood of Canadians dying from cancer, and an enhanced quality of life of those affected by cancer.

Advancing cancer control with and for First Peoples is a priority of the Canadian Partnership Against Cancer.