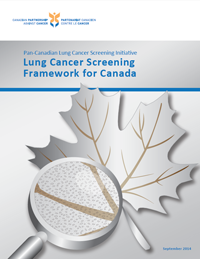 “Development of organized screening is a long process and this is only the first step of many. The flexibility of the Framework allows interested provinces and territories to develop initiatives to match their needs,” said Dr. Heather Bryant, Vice President of Cancer Control at the Partnership.

It’s estimated that 25,500 Canadians were diagnosed with lung cancer in 2013 and that some 20,200 men and women died from the disease in the same year. The five-year relative survival rate for lung cancer is 17%.

“Lung cancer is the leading cause of death from cancer in Canada and the second most common cancer in both men and women. But most lung cancers are not symptomatic until they have advanced to late stages of the disease and are incurable. That’s why it’s encouraging to see results from international trials suggesting we may now have a screening test that could lower mortality – a chance to save thousands of lives,” said Dr. Natasha Leighl, President of Lung Cancer Canada.

The Framework eliminates duplication of efforts, saving time and resources that interested provinces and territories would otherwise have had to devote to developing their own approaches to lung cancer screening. It provides guidance to provinces that may be investigating the feasibility of lung cancer screening for high-risk populations and provides a framework of how to minimize the negative impact of opportunistic screening.

Screening for a high-risk population

While population-based screening programs for breast, cervical, and colorectal cancers target people at average risk of developing these cancers, lung cancer screening is focused on a defined high-risk population because the risks and complications associated with screening lower-risk cohorts, such as false positive findings, likely out-weigh any potential benefits.

In addition, lung cancer screening involves exposure to low levels of radiation. If abnormalities are found, any resulting investigation or treatment could carry additional significant risks.

Setting criteria for eligibility to participate in screening requires consideration of multiple factors, aside from risk exposure. Although conditions such as age eligibility should ideally be standardized across the country, as it is for colorectal cancer screening, lung cancer screening will likely evolve differently across the provinces and territories in terms of timing and approaches that best fit the needs of the jurisdiction.

The consensus statements within the Framework were developed through an extensive consultation process with pan-Canadian working groups made up of nominated Pan-Canadian Lung Cancer Screening Network members and other expert volunteers. These consultations took place between April 2013 and April 2014 and involved clinicians, pathologists, radiologists, smoking cessation experts and thoracic surgeons, among others.