During National Non-Smoking Week, January 15-21, the Canadian Partnership Against Cancer is featuring the latest information on what jurisdictions across Canada are doing to address emerging tobacco control issues.

The following new and updated resources are available online: 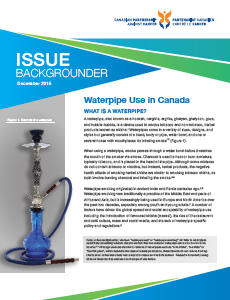 Waterpipe Use in Canada
Over the past two decades, waterpipes have been increasingly used in Europe and North America, particularly among youth and young adults. There is a widespread misconception that waterpipe smoking is safer than cigarette smoking. However, using a waterpipe to smoke commercial tobacco is known to pose serious health risks to both the smoker and those exposed to its second-hand smoke. Learn more about what jurisdictions across Canada and internationally are doing to address waterpipe use. 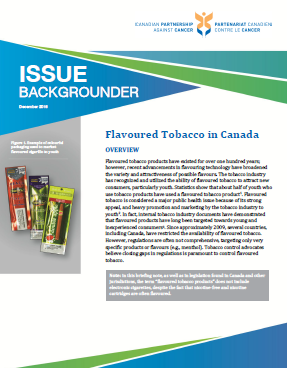 Flavoured Tobacco in Canada
Flavoured commercial tobacco products have existed for over one hundred years; however, recent advancements in flavouring technology have broadened the variety and attractiveness of possible flavours. Since approximately 2009, several countries, including Canada, have restricted the availability of flavoured tobacco. However, regulations are often not comprehensive, targeting only very specific products or flavours. Learn more about what jurisdictions across Canada and internationally are doing to address flavoured tobacco use. 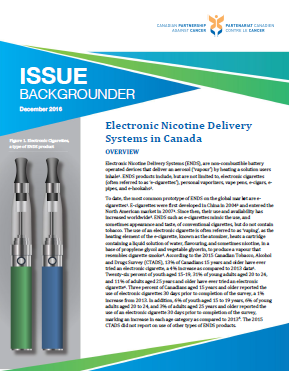 Electronic Nicotine Delivery Systems (ENDS) in Canada
Electronic Nicotine Delivery Systems (ENDS) such as electronic cigarettes may be a potential harm reduction strategy for tobacco users who use the devices as a smoking cessation aid. However, they can also cause harm through exposure to carcinogens and other substances and are a possible gateway to becoming addicted to nicotine or using other commercial tobacco products. Learn more about what jurisdictions across Canada and internationally are doing to address ENDS use.

The Partnership works with partners across Canada to promote greater integration of tobacco control in cancer control. In addition to presenting evidence on emerging issues in tobacco control and tobacco cessation, we fund provinces and territories across Canada to build or expand approaches to help cancer patients and their families quit smoking, which can improve their cancer treatments and recovery. We also produce and regularly update pan-Canadian smoking cessation program scans, providing an overview of current and leading or effective practices in smoking cessation for various settings and populations. Visit cancerview.ca/tobacco to learn more.

Read article Paramedics and Palliative Care: Caring for people where they want it, when they need it most
February 4, 2022