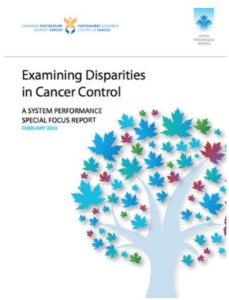 TORONTO – A new System Performance special focus report, Examining Disparities in Cancer Control, released today uncovers potentially important disparities in the cancer care received by Canadians based on how much they earn, where they live, and if they are recent immigrants or Canadian-born. Led by the Canadian Partnership Against Cancer, the report shows that people from the poorest urban neighbourhoods are less likely to survive cancer compared with urban residents from the richest neighbourhoods and that this might be related to inequities in access to diagnosis and treatment services.

The new report shows that the wealthiest urban residents have a 73% chance of surviving their cancers five years after a diagnosis (relative to others in the general population of their age, sex and income level) compared with 61% for people living in the poorest urban neighbourhoods.

“The underlying cause for certain cancer disparities, including colorectal cancer, in remote northern communities is multifactorial; however inequities in social determinants and lifestyle risk factors would be the driving force behind the significant differences,” said Dr. Kami Kandola, Deputy Chief Public Health Officer, Government of Northwest Territories. “This new report can be helpful to jurisdictions since it highlights existing disparities based on income, immigrant status and geography. We now have a national benchmark to compare cancer indicators through a health equity lens. This will allow appropriate allocation of resources and prioritization of interventions to where the need is greatest. Kudos to the Canadian Partnership Against Cancer for bringing this to the forefront.”

Earlier research has established that, with higher rates of smoking and obesity, lower income and rural Canadians have a greater risk of getting some cancers and dying from them. However, gaps in survival tend to reflect differences in diagnosis and treatment as opposed to differences in the risk of getting cancer. In this context, the report reveals for the first time at a pan-Canadian level that people living in lower income and rural and remote communities may not be accessing the best cancer care as compared to their wealthier urban neighbours. For example, although finding cancers early can often offer a better chance of surviving the disease, the report’s results suggest that Canadians from lower income households are less likely to report being screened for cancer than those from higher-income households. The screening rates for lowest versus highest income Canadians are 61% versus 77% for breast, 25% versus 38% for colorectal and 72% versus 88% for cervical.

The report provides indicators that suggest that across the diagnosis and treatment pathway from screening and early detection, to radiation therapy, surgery, and enrolment in clinical trials – at every step of the cancer-care journey, these lower income and more rural-dwelling segments of the Canadian population could be falling behind.

“The report’s results confirm that inequities exist in cancer outcomes and the cancer care received by Canadians. Results also show where progress has been made through specific interventions, such as improving access to breast screening in remote communities through mobile mammography units,” said Dr. Heather Bryant, vice-president, cancer control at the Canadian Partnership Against Cancer. “Studies like this one are intended to identify best practices that can be more broadly adopted to improve cancer control across the country and to encourage conversations on how we could work together more effectively to benefit all Canadians.”

The Canadian Partnership Against Cancer works with Canada’s cancer community to reduce the burden of cancer on Canadians. Grounded in and informed by the experiences of those affected by cancer, the organization works with partners to support multi-jurisdictional uptake of evidence that will help to optimize cancer control planning and drive improvements in quality of practice across the country. Through sustained effort and a focus on the cancer continuum, the organization supports the work of the collective cancer community in achieving long-term population outcomes: reduced incidence of cancer, less likelihood of Canadians dying from cancer, and an enhanced quality of life of those affected by cancer.