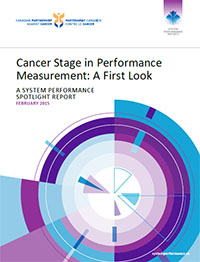 TORONTO — For the first time, pan-Canadian stage data for the four most common cancers are being collected and reported in Canada, providing powerful information to plan care and predict outcomes.

The data can also help policymakers and others determine where best to focus efforts to reduce the burden of cancer, whether through screening and early detection or better access to improved treatment.

“The perennial issue for the cancer control community when we start to see differences in outcomes is, is it due to valuable health-care resources being placed in early detection or better treatment? Which path will get us to less disease and better outcomes faster? Collecting national staging data brings us closer to an answer,” said Dr. Heather Bryant, Vice President of Cancer Control at the Canadian Partnership Against Cancer.

What is cancer staging?

Cancers are staged based on the size or extent of the primary tumour, whether cancer cells have spread to nearby lymph nodes and whether the cancer has spread to other distant parts of the body. Stage 0 cancers are considered to be the earliest form of the disease, while Stage IV cancers are the most advanced, having spread from the initial site to other parts of the body. Bigger tumours and greater spread of disease will result in a higher stage.

Figures from the report show the vast majority of Canadians diagnosed with breast cancer in 2010 had Stage I or II disease. The incidence of Stage I breast cancer was more than 10 times higher than the rate for Stage IV disease. This is to a large extent due to the success of screening and early detection efforts of the last 20 years.

The incidence rate of Stage IV lung cancer was found to be more than twice that of Stage I or II, the report shows. Lung cancer is responsible for more deaths than in other cancer in Canada, but increased smoking cessation is helping to bring down those numbers. The Partnership has also been facilitating the development of a framework for potential screening programs for people at high risk of developing lung cancer.

Knowing the stage of cancer when it is first diagnosed helps identify treatment options. Over time, it may also point to the effectiveness of screening programs. When combined with data on treatment, stage data can help track whether cancer care is being delivered according to recommended practice guidelines.

Data on cancer survival-by-stage are also being collected and will be available in 2015. Combined, this new information can help shed light on opportunities for improvements in cancer control across the country.

The Canadian Partnership Against Cancer works with Canada’s cancer community to reduce the burden of cancer on Canadians. Grounded in and informed by the experiences of those affected by cancer, the organization works with partners to support multi-jurisdictional uptake of evidence that will help to optimize cancer control planning and drive improvements in quality of practice across Canada. Through sustained effort and a focus on the cancer continuum, the organization supports the work of the collective cancer community in achieving long-term population outcomes: reduced incidence of cancer, less likelihood of Canadians dying from cancer, and an enhanced quality of life of those affected by cancer.